For the students of VHS, the month of April has been a packed month. Amid all of the normal stressors that come with school, extracurriculars, and out of school responsibilities, the pressure of the end of the school year is coming down hard. You’d be hard pressed to find a senior not talking about their plans for the fall, and all of the planning and what if’s that come with them.

Amongst all of that, April has also been a great month for student involvement in school activities, specifically when it comes to activism. After an overwhelming amount of support for last month’s National School Walkout on March 24th, students took to the streets once again on April 20th for yet another. This walkout, taking place on the 19th anniversary of the Columbine school shooting, received an outpouring of support from fellow students and community members alike. The walkout started at Valparaiso High School at roughly 10 am, with students leaving the school grounds at 10:15 to walk to Downtown Valpo. Held at Central Park Plaza in the heart of downtown, students and community supporters gathered for hours, listening to student speakers, local musicians, and any passionate activist in attendance, to make their message known. Amongst these students were VHS seniors Ollie Grcich and Bryce Hendricks, both of which helped in organizing the previous month’s walkout as well as this one. The student body, especially the senior class, of VHS is incredibly proud of what our fellow classmates are doing to help spread a sentiment many of us feel is worth the time. 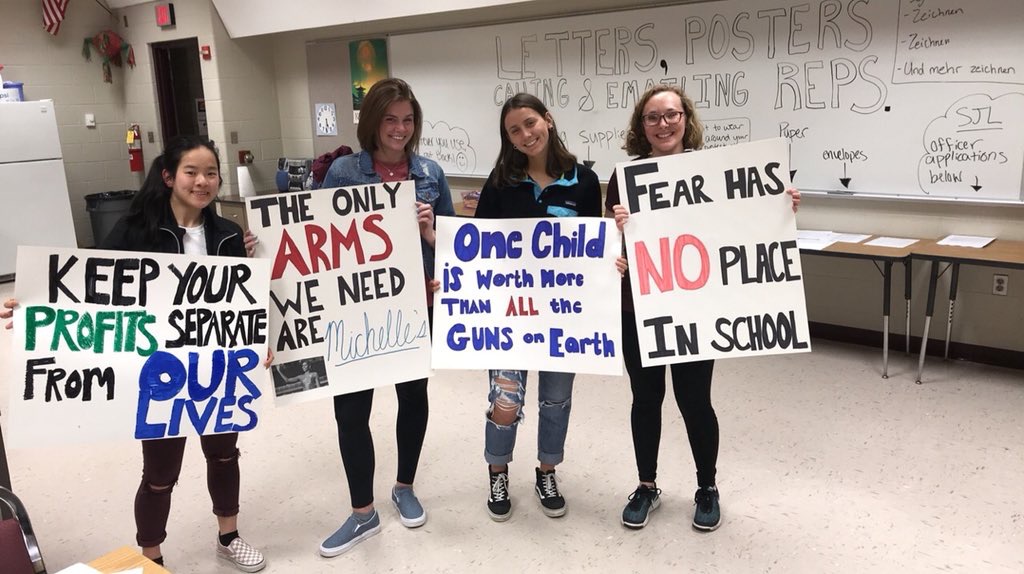 To top off the end of April, the VHS Drama Club hosted their annual April Antics variety show, titled “What’s The Buzz?” at Benjamin Franklin Middle School on April 19th-21st. The show hosted 18 different student acts, ranging from solo violin performances to stellar numbers from the Varsity Singers and the Vikettes. In between performances, fellow student actors performed skits relating to an overarching story that had deceit, romance, and humor. Being this school year’s last show for the Drama Club, students wanted to be sure they went out with a bang and left the audience anticipating next year’s offerings. 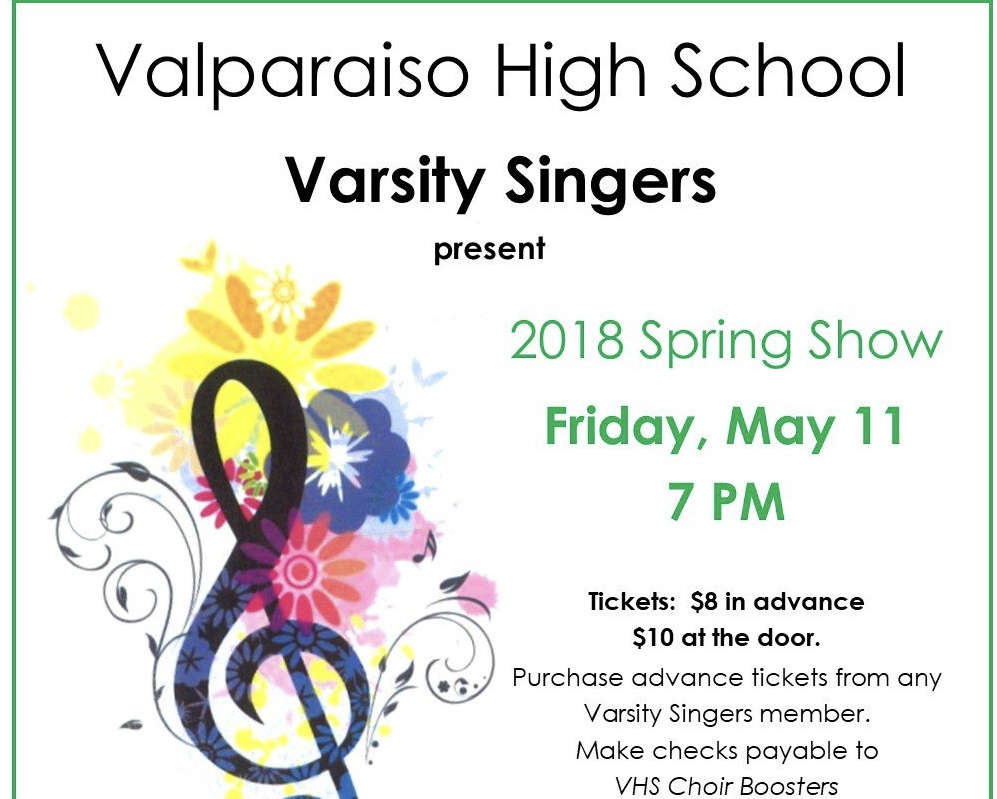 There’s a ton coming up at VHS to top off the end of the year, as there always is. Students and community members can expect a ton from our resident talent, including an upcoming Varsity Singers show, the all male beauty pageant Mr. VHS, prom, and the biggest event of them all, graduation.

The Varsity Singers are hosting their final show of the 2017-2018 school year on Friday, May 11th at the Valparaiso University Center for the Arts. Expect to be blown away by the incredible talents of our student singers and dancers, many of which will be performing for the very last time. Seniors Zac Flasch, Lia Thayer, Carson Swallow, Mollie Gniadek, and Abe Ringenberger will walk on stage as VHS Varsity Singers for their final performance, and it’s sure to be one to remember. Make sure to get your tickets sooner rather than later!

Also coming in May, the senior boys of the class of 2018 will attempt to dazzle and impress the student body and general public alike with their immense talents and stunning looks in the Mr. VHS show. Every year, students look forward to seeing their graduating seniors run the gamut and attempt to gain schoolwide recognition as the titular Mr. VHS. This is sure to be a great time for anyone in attendance. Expect more news on the exact details soon.

The theme for the 2018 VHS Prom has been announced, and juniors and seniors are getting ready to don their formalwear and masks for the masquerade ball on May 18th. Grand march will be taking place in the VHS main gym from 6:15pm to 7:30pm, giving all families and bystanders a chance to see the couples in all their best attire and moods. The actual prom itself is taking place at the Porter County Expo Center, starting at 8:30pm later that night, and is sure to be a night to remember for it’s attendees.

Finally, the graduation commencement ceremony for the VHS Class of 2018 will be taking place on Sunday, June 3rd in the VHS fieldhouse (or on the football field, weather permitting) at 7pm. Student speakers representing the senior class will take the stage, amidst all of the normal activities, and the excitement for our final moments in the halls of VHS is incredibly palpable. It’ll be an emotional and wonderful evening for the families of the graduating seniors, and even better for those sitting in the seats on the main floor. 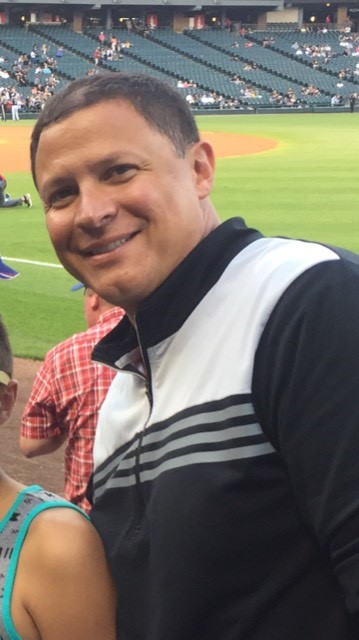 “I’ve been at VHS since 1999 after graduating from Purdue Calumet."

John Gutierrez is the kind of teacher whose reputation precedes him. Students who’ve taken APUSH vouch for the man in crowds of enthusiastic approval, citing him as being one of the best VHS has to offer; and they are absolutely correct. There is no other classroom quite like Mr.G’s, and that is a testament to the incredible personality of the man teaching the class.

“I would say the most gratifying aspect about teaching is helping students make connections between what happened in the past and the issues we face today,” said Gutierrez.

Mr. G manages to take a subject that not many students consider to be of great importance (US History), and create an environment in which they hang onto every single moment of his lectures. Incorporating pop culture, current events, and, as any student can remember, the History Channel show “America: The Story of Us”, he manages to draw his students in and hold their attention all throughout the year. When asked to give a piece of advice every high school student should hold onto, he responded with this;

“We all love this same country, the same people, and we should work together to give each person no matter who they are or what they look like the best opportunity to follow their dreams and be successful.”

Mr. Gutierrez also holds the responsibility of being co-sponsor of VHS’ History Club and being the assistant coach for the Girl’s golf team. It’s even more amazing that he is able to transfer the same energy from his classroom into every other thing he does at VHS. He’s a truly one of a kind teacher, and every student who’s sat in his room recounts the same story.

“I’m inspired by students wanting to make a difference in their communities and when we all understand we have more in common than issues that separate us.”