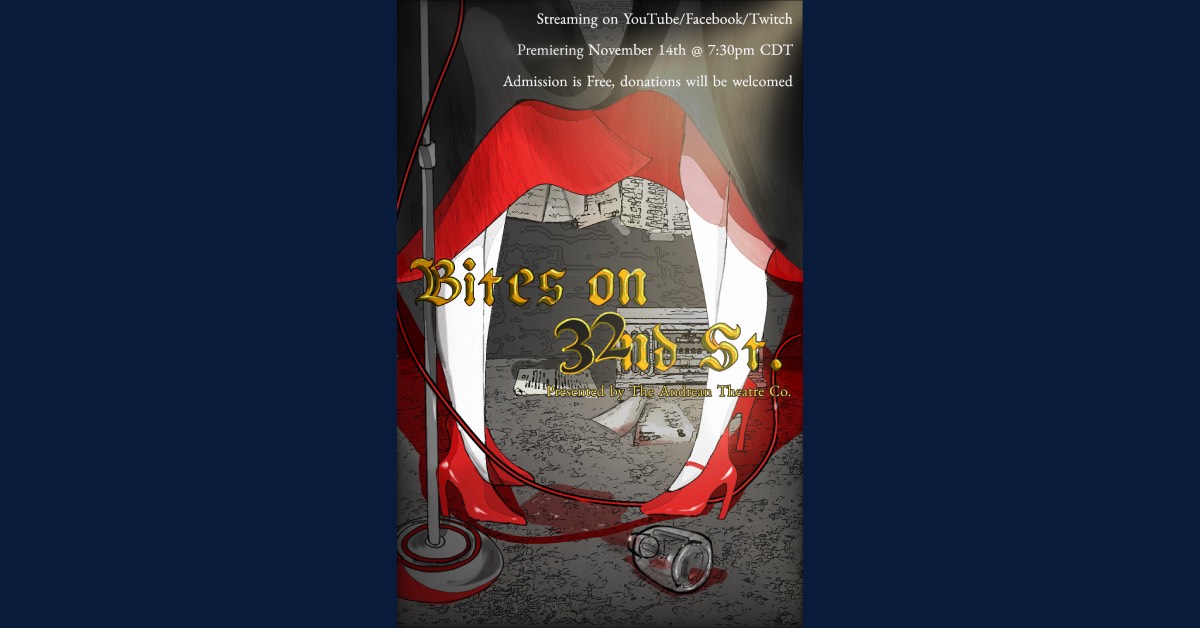 In a year of sickness, civil unrest, and uncertainty, Andrean High School’s Theatre Department has found a way to bring theatre to the era of COVID-19. Deciding not to hold a traditional stage production, Andrean’s Theatre Department broadcasted a radio play. This radio play, “Bites on 32nd Street,” was written by former Andrean student Mark J. Judge. “Bites on 32nd Street” utilized voice acting and special effects to tell a funny, yet frightening tale.

“Bites on 32nd Street” parodied the radio plays of the early 1940s complete with a narrator and ad breaks for products such as the “new” sliced American cheese and boxed cake mix. “Bites on 32nd Street “told the story of private investigator Charles Shoemaker, played by senior Dylan Barthel, and local deli girl, played by junior Ali Quinones, as they attempted to solve the mystery of vampirism that has plagued Baltimore.

“Bites on 32nd Street” started rehearsals on September 28 and was originally supposed to be broadcasted on October 23, but the quarantine of a few students pushed the opening date. The play premiered live on YouTube, Facebook, and Twitch on November 14.

Play production was not without its difficulty, but due to the hardworking cast, crew, and Theatre Director Joseph Konkle, “Bites on 32nd Street" was able to come to life. For those who plan to listen, the play is sure to bring a smile to all who need one.

Joseph Konkle, the first-year Andrean Theatre Director, has always had an interest in theatre.

“I always loved making up voices in the mirror and then doing them for my mom to try and make her laugh,” he said. “I never tried to be in the spotlight; I wanted to be the spotlight. I wanted to take my ability to make others laugh and use it to bolster other people. Lift them up and let the world see how great they are. I’ve always loved helping people realize they are capable of so much more than they thought.”

Konkle realized that theatre was his life calling when he was directing a production in which the lead girl had terrible stage fright. Her stage fright was so intense that when she got on the stage to perform her number in front of the cast, she would run off the stage crying. Knowing how talented the girl was, Konkle poured his effort into building her confidence.

“Over the course of the two months that the production ran, we worked on it and come showtime, you wouldn’t believe she was ever afraid to begin with,” he said. “She was fearless and confident, and it made my heart swell with joy. Seeing students realize that they could do anything they set their mind to made me believe I could do the same to other students. It made me realize that I have the ability to affect these students' lives in a significant way.”

This year, the theatre industry has been severely impacted by COVID-19. Konkle finds great importance in theatre and the arts during a pandemic and in regular life. He found it especially important to still have a fall show.

“I believe that art is what makes life livable,” Konkle said. “I mean, think about it. What would you do during quarantine had you not had Netflix, Hulu, Disney+, or YouTube? Life would have been pretty unbearable.”

“Art can make us question ourselves, think in a different way, or make us laugh,” he said. “In times like these, it's important to have something that can make you laugh. I did this production for the students. I didn’t want to be the reason some seniors didn’t get to do a play their last year in high school. The experiences one can have when involved in the theatrical arts are experiences they carry with them through the rest of their life.”

“Those two things together created the perfect storm for a radio play.”

The production of “Bites on 32nd Street” was not exempt from being affected by COVID-19 as Konkle found difficulty in producing a show during the pandemic.

“The safety aspect was the most difficult part of the show. As important as this was to me, I never wanted to compromise on the safety of my students,” he said.

Even though there may have been challenges, Konkle still found joy and laughter in this production and in his students.

“I’ve talked about them a lot, but the students really are great. They are funny and caring,” he said. “Honestly, they are the best group I think I could have received.”

Konkle described his experience with “Bites on 32nd Street” in one word.

“Cachinnation. Meaning an explosive sound that is a sign of amusement. Something I did frequently during the show,” he said. “Every other line these students said made my sides split open from laughter!”