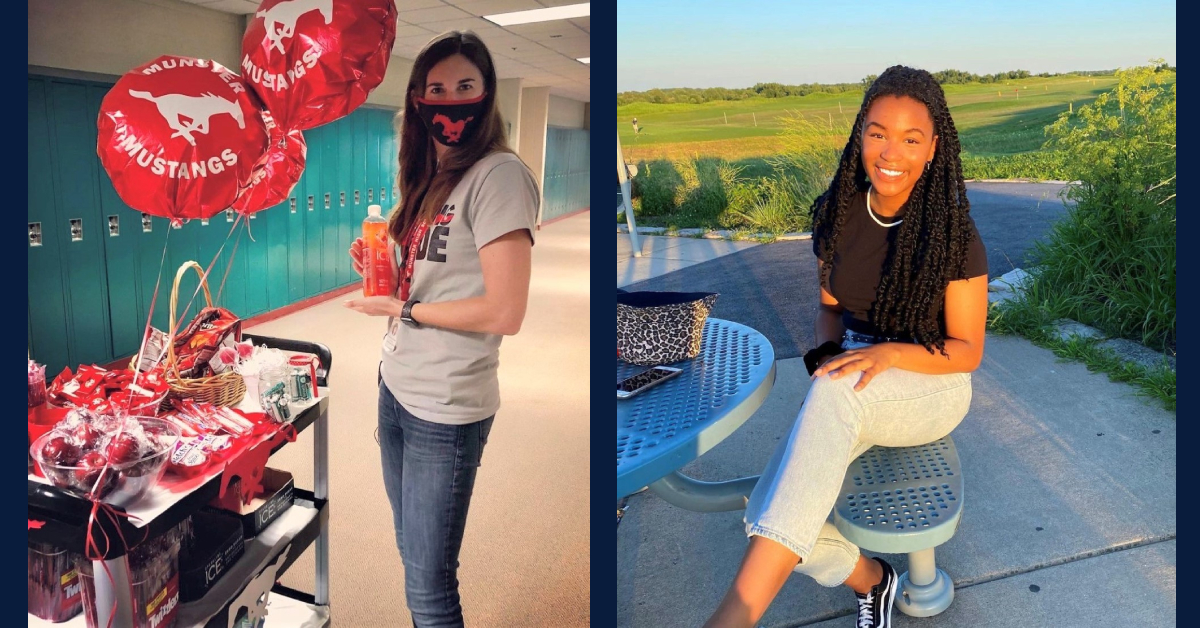 The month of November was a spontaneous one for the Munster High School Mustangs as it presented them with numerous surprises. The initial surprise was a spike in COVID-19 cases within the school’s staff, causing all students to participate in virtual learning from November 16 until December 2. Along with virtual learning, the students had their fall and Thanksgiving breaks. This combination caused November to zoom right before the students’ and staffs’ eyes.

To ensure students’ mental health was stable during these difficult and unusual times, weekly emails were sent to every student, which provided tips to help students regulate their emotional well-being and manage stress.

Although last month generated lots of adversity, students continued to stay positive and make an impact in the lives of those who are less fortunate. For instance, the student government hosted a food drive, which allowed students to give canned and boxed goods to families in need of food.

Munster High School also announced that the yearbook for the 2020 through 2021 school year is now on sale through the website, https://www.yearbookordercenter.com/.

After attending Munster High School, Brianne Rubesha attended Ball State University to further her education. Her Mustang pride led her back to her roots as she is now an anatomy and biology teacher at Munster High School. Along with being a science teacher, Rubesha has been coaching the Munster Girls Basketball Team for eight years. Previously, she was the junior varsity coach; however, she has leveled up to being the assistant varsity coach this year. She proclaimed her excitement for coaching as she joyously stated,

“My motivation for coaching basketball is the love for the game that I get to share with young athletes today,” Rubesha said. "I played basketball in high school and enjoyed the team sport. I have many great memories with my teammates and hope to bring the same opportunities to my athletes.”

Sports has always been an enormous component of Rubesha’s life as she was a four-sport athlete. One of her favorite sports is cross country. Her love for distance running has continued throughout her life as she made it a goal of hers to run a marathon, and in 2016 that, is exactly what she did as she ran in the Chicago marathon. When she comes home, Rubesha is greeted by her cheerful Mini Goldendoodle.

Taylor Graham is a heavily involved senior at Munster High School. She is currently involved in Civics Club, Black Culture Club, Project X, Link Crew, and French Club. Although Graham is studious, she still carves time out of her day to partake in her favorite hobbies.

These activities include competing in dance, roller skating with friends, and late-night ice cream runs. After high school, Graham has big plans as she will attend college and major in computer science and looks forward to dancing recreationally. Graham is one of the many students at Munster High School who decided to be a completely virtual learner.

After completing the first semester fully online, Graham has gained self-discipline and outstanding time management. For without these skills she would not have been the honor roll student she is today. Graham expressed the key components that have helped her become a successful virtual student.

“You have to stay focused and do your schoolwork,” Graham said. “Try not to work in bed and keep your phone away from you when you can. The biggest challenge is communication. It’s important to stay on top of your emails and take the time to reach out to teachers personally when help is needed.”

December 2, students were able to return to in-person learning after having to virtually learn for two weeks due to a shortage of staff.

Along with the return to the classroom came the rush of ensuring all assignments were completed and accounted for as the finals and the end of the year were near. During the week of December 14, the students had their last week of high school for the year 2020 and began taking their final exams for their classes. December 15 through December 18 were the scheduled days for finals, with two finals being scheduled for each day.