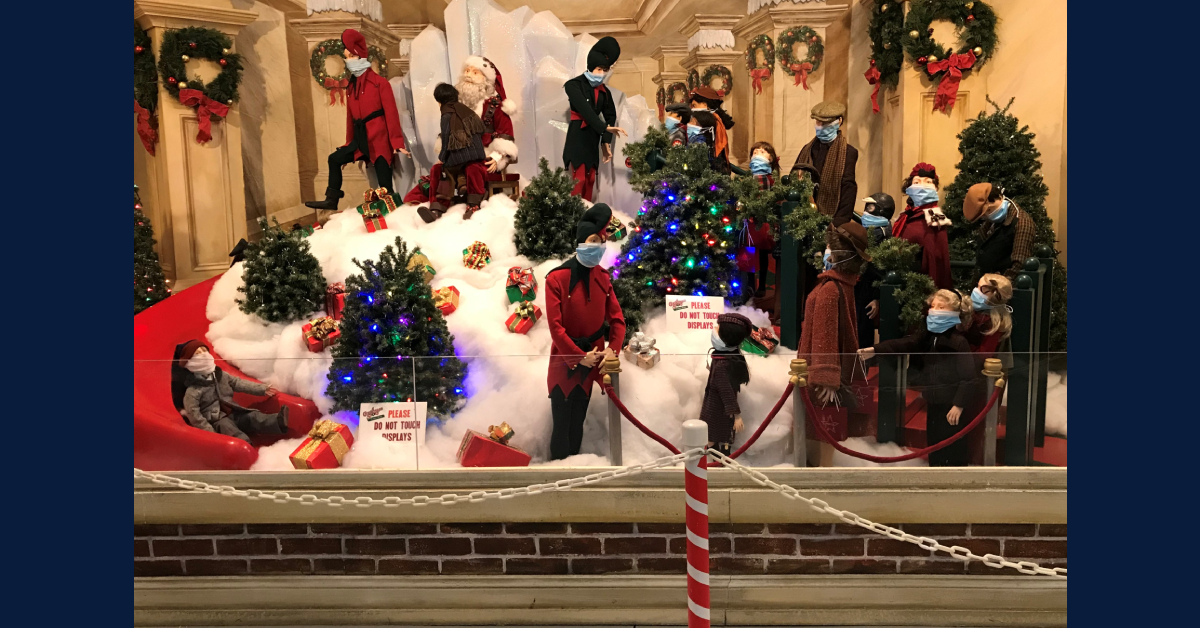 "A Christmas Story" is one of the most beloved Christmas movies of the holiday season, and its roots are in Northwest Indiana. The original movie was written by Jean Shepherd of Hammond, Leigh Brown, and Bob Clark. The movie was based on Jean Shepherd's book from 1966 “In God We Trust, All Others Pay Cash.” The book has short stories from Jean Shepherd, including when he was growing up and his experiences in Hammond, Indiana. There is “A Christmas Story” Comes Home exhibit where there are different window exhibits and decorated trees as well. It is free to attend.

The window exhibits are various scenes from the movie, like the Higbee’s Department Store, A Hero's Dream, Flick’s Tongue and the Triple Dog Dare, A Major Award, Santa Mountain, The Bumpus Hounds, and The Parker Living Room. Outside, there is a Flick statue of the scene where his tongue is stuck to the flagpole when he was triple dog dared to do it. There are also some Christmas trees that are sponsored by different local establishments, such as the Mascot Hall of Fame, Indiana Dunes National Park, and Albanese Confectionery.

The Higbee’s Department Store window display that is seen in the movie.  The sign about it says, “Ralphie Parker and his friends jostle in wonderment at the department store’s holiday window display." The display showcases the season must-have toys described in the movie as “mechanized electronic joy."

The next window exhibit is A Hero’s Dream. The sign says Ralphie Parker and his BB gun save the family from a gang of villains in the background. With “Ol’ Blue” in hand, Ralphie protects his family, who is hiding under the kitchen table. One bad guy gets away and warns that if he comes back, he’ll be pushing up daisies.

Coming up is Flick’s Tongue and the Triple Dog Dare. The sign says Flick Exclaims “Stuck, Stuck, Stuck!” after Schwartz triple dog dares him to stick his tongue to the frozen flagpole. The police and fire department arrive at Warren G Harding Elementary School to help Ms. Shields retrieve Flick.

In the A Major Award exhibit window, the Old Man proudly displays his major award in the front window of the house on Cleveland Street. The glowing leg lamp was his award after winning a contest. The director of “A Christmas Story,” Bob Clark, played a cameo role as the dimwitted neighbor in this scene.

The next window exhibit is Santa’s Mountain. The sign reads that a visit to Santa at the department store is Ralphie’s last chance to ask for a BB gun and not a chummy football. After Ralphie asks for the “holy grail” of Christmas gifts Santa replies with, “You’ll shoot your eye out kid,” and pushes him down the slide.

The Bumpus Hounds comes after that. The hillbilly neighbors’ dog destroys the Parker’s Christmas dinner leaving the family with no turkey, no turkey sandwiches, no turkey salad, and no turkey hash. The Christmas would live in the Parkers’ memories like the one that they were introduced to Chinese turkey at Chop Suey Palace.

The last window exhibit is The Parker Living Room. The sign says Ralphie holds his BB gun as he gradually drifts off to sleep remembering that the gun was the best Christmas gift he would ever receive. The Old Man and Mom celebrate the last moments of their memorable Christmas knowing that, “All is right in the world.”

This exhibit was made possible by South Shore Convention and Visitors Authority for both their 30th anniversary and for "A Christmas Story" 30th anniversary. The statue was created by Oscar Leon, who is an artist with Timeless Creations. That is the studio of Julie Rotblatt-Amrany and it is in partnership with Warner Bros. Consumer Products. They have also created the Orville Redenbacher statue in Valparaiso, Indiana, and the Michael Jordan, Frank Thomas, and Harry Carey statues in Chicago, Illinois. They also have made statues at the Community Veterans Memorial in Munster, Indiana.

If you are interested in visiting this exhibit, it can be found at the Indiana Welcome Center. The address of the Welcome Center is 7770 Corinne Dr. Hammond, IN 46323. The hours are 9 a.m. to 4 a.m. Besides on New Year’s Eve, the hours are 9 a.m. to 3 a.m. and they are closed on New Year’s Day. The last day it is open is January 3. It is free to attend. There is a discount at the gift shop on 25% off Christmas and “A Christmas Story”-themed merchandise.