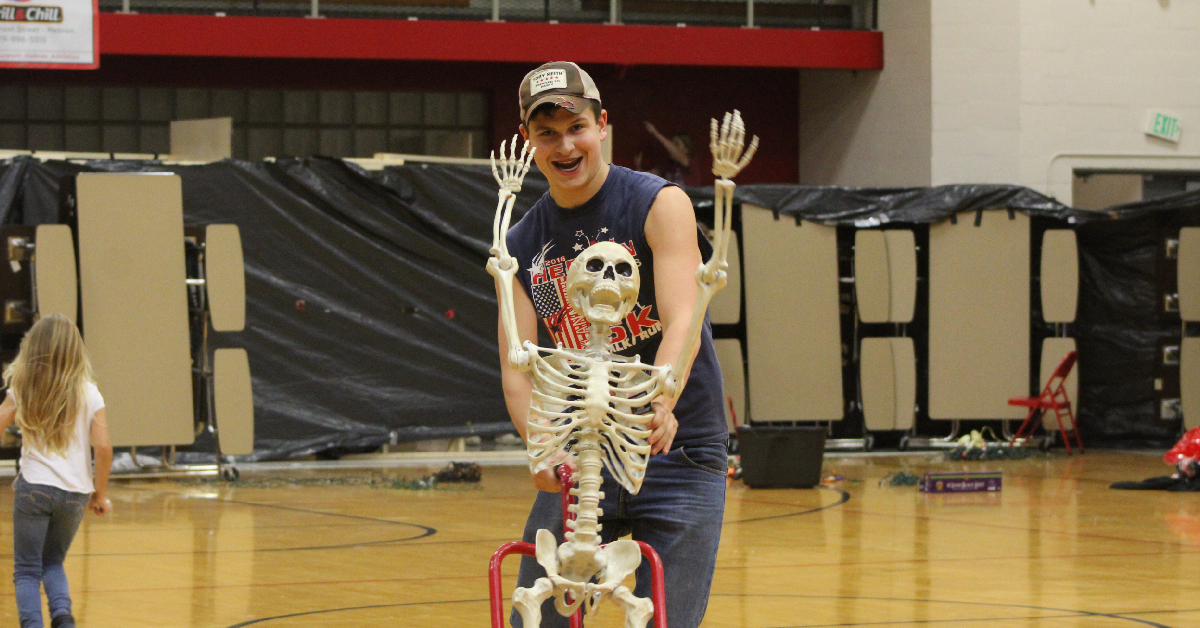 Every year students, staff, and supportive parents of the Hebron schools join together during the end of October to set up an amazing event to donate nearly all proceeds to the Angel Trees. Students of all ages begin to set up, design, and act the part of Hebron's Haunted House in favor of children of needy families. Meanwhile, in the month of December, the students go out and buy as much as they can on the lists of clothes, toys, and other goodies for all on the list.

During the many years of this amazing charity event, the main spotlight of the creation is Mr. Dan Pastrick, an 8th-grade science teacher. Some backstory on Mr. Pastrick is that he was recognized during 2015-2016 for the Life Changer of The Year Reward, a national life group, and also the organizer of the Recess Rescuers, a daily task where middle schoolers go play at recess with the elementary children. Elementary students love it when the “big kids” come out to play with them as if they were their older siblings. Mr. Pastrick is a major influencer on the students of all the Hebron schools. As an amazing teacher and father figure to everyone around him, he helps out as much as he possibly can, and is always someone you could go to whenever you need to talk or laugh.

This exciting event was not only created by Mr. Pastrick but also Mrs. Hall, a 7th-grade science teacher, and her husband, John Hall. The haunted house began 19 years ago, but for the first three years was exclusively an event for student council and National Junior Honor Society middle school students and was not for the public in any way. The original idea of this was that students would walk through it, then congregate in the old auditorium in the middle school where they would watch a Halloween movie. “Either Gremlins or The Goonies, I don't remember,” stated Mr. Pastrick.

During the course of the 19 years, this extremely fun and spooky event raised just over $90,000! Of those proceeds, $15,000 were raised this year as one of the highest events they’ve had out of all the years they’ve been doing this charity event. During these years, one student described his experiences with this event as his “favorite time of the year.”

Dominic Csomos, a junior, has been doing this since the 7th grade. He explained that for his first year, he felt very stressed and extremely exhausted toward the end of the nights. Lines would be out to doors with wait times up to an hour or more. Even through all the hard work, he wouldn’t spare any minute of it to do anything else with his time.

Every year, they always have a different category as to what type of theme they will do. In the past, they did themes like the apocalypse or kids’ Halloween movies. This year, their theme was “Campfire Stories at Camp Scarecrow,” based on the books, “Scary Stories To Tell In The Dark.” There were nine sections with different themes and stories behind them. They spread around the entire middle school at Hebron, where guests walk through the halls, encounter obstacles like a tube they made for people to crawl through, or they put people inside a box where terrifying masked people wait outside with chainsaws - but don't worry, they have no chains.

It started off with The Drum Legend, then The Wendigo, Poltergeist, One Sunday Morning, Monopoly, Harold the Scarecrow, The Wonderful Sausage, The Red Spot, and finally the Mash-Up Room. These all had very distinct details and themes, and everyone that worked it acted the part perfectly. On their final night, they added a special scary bonus room that awaited all those who visited the camp. As for the setup, the entire event is planned out extremely cautiously and very thought out.

At the end of the event, everyone that was a part of the haunted house came together and started discussing ideas and improvements for the following year. For the 4th of July parade, they will make a float for the upcoming year’s theme, kind of like a sneak peek. Once the school year begins, there are meetings are held before and after school, with students constantly communicating via text, email, docs, and slides. The actual set-up time for the event takes up to a day and a half of hard, non-stop work.

The Hebron community was overwhelmed with the support of all local and nonlocal businesses that sponsored the haunted house. Some sponsors are AaLand Diamond Jewelers, Andrea’s Gift & Thrift, Dan Roeske Farm, DeMotte State Bank, Don & Terri Ensign, Hebron Dairy Queen Grill & Chill, Fidelity National Title Group, NWI Storm Elite Softball Team, Salon 618, Smile Your Best Dental, Southlake Body Auto Repair, Subway Hebron, The Gathering Place, and 108 Liquors. The Hebron school district thanks all for helping them give back to the community for yet another year and hopes to continue this extraordinary event for many years to come.