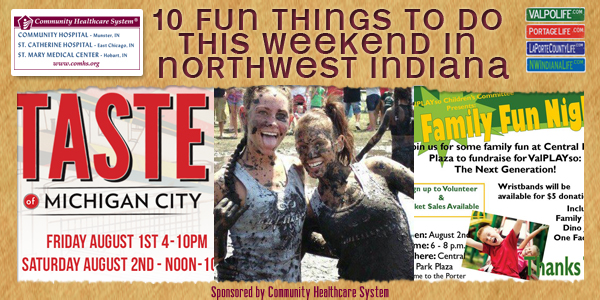 Each weekend we bring you 10 Fun Things to Do in Northwest Indiana so you are never without something to do! This weekend features some great events from Michigan City to Portage to Valparaiso to Hammond and plenty in between. Enjoy!

Guardians of the Galaxy at Portage 16 IMAX!
This film expands the Marvel Cinematic Universe into the cosmos, where brash adventurer Peter Quill finds himself the object of an unrelenting bounty hunt after stealing a mysterious orb coveted by Ronan, a powerful villain with ambitions that threaten the entire universe. Click here for showtimes!

La Porte County Family YMCA 35th Annual Triathlon
The 35th Annual Triathlon will be held on August 2nd at Soldier’s Memorial Park in La Porte, Indiana. This USAT sanctioned event features Chip Timing and includes a 1/4 mile lake swim, 12.4 mile bike ride and 3.3 mile run. Athletes will have the opportunity to compete as individuals or as part of a team. Athlete registration opens at 6:30 A.M. at Cummings Lodge in Soldier’s Memorial Park and closes at 7:30 A.M. The La Porte County Family YMCA is also offering an orientation beginning at 7:30 A.M. in the Beach House for those individuals competing in the Triathlon for the first time.

Hobart Jaycee's 2014 Mud Volleyball set for August 2nd & 3rd
The Hobart Jaycees will hold a Mud Volleyball tournament at Rugby Field, 112 E. Old Ridge Road in Hobart on Saturday, August 2 and Sunday, August 3. Sponsored by Indiana Beverage, a beer garden and family area will be open at 8:00 a.m. Live music will begin at 10:00 a.m. and trophies will be awarded to the top two teams. The tournament will include pool play and rally scoring.

ValPlayso Family Fun Night Coming Up on August 2
ValPlayso Family Fun night is Aug 2nd at Central Park Plaza in Valparaiso starting at 6pm. Bring the WHOLE family for a night of dancing, jumping, and face painting! For a $5.00 donation per child you get a wrist band with unlimited bouncing in a bounce house provided by DINO JUMP VALPO, a Zumba dance party hosted by Shawna Smith Plata, and your face painted by "Erica the Great" Erica Flanagin George.

Country Singer/Songwriter Sara Evans Live in Concert at Blue Chip August 2
Country singer and songwriter Sara Evans, with number one singles such as "No Place That Far," "Born to Fly," "Suds in the Bucket" and "A Real Fine Place to Start," will perform Saturday, August 2 at 8 pm CT in the Stardust Event Center at Blue Chip Casino.

2014 Portage Community Market
The Portage Community Market will be held every Sunday from 11:00 a.m. to 3:00 p.m. beginning June 1st and ending September 28th. Come and get great produce, crafts, and other items that come from local farms and businesses! Due to the construction of Founder’s Square, it will be held at Woodland Park for the 2014 season.

Join 'ABRA Rescue Angels - Brew Benefit for Argus'
ABRA Rescue Angels are having a fundraiser for Argus, one of their dogs who has very special needs. The benefit event is Sunday, August 3, at The Fifth Amendment bar in Hammond, located just north of 80/94 at 6729 Kennedy Avenue. Get ready for lots of fun and some great stuff going on. ABRA gives many thanks to Three Floyds Brewpub, Chicago Pita Kitchen, Dark Matter Coffee, and Marco's Pizza for their awesome donations! Buy a bracelet for all you can drink soda or juice for $6, Lite draft for $12, all you can drink craft beer, including Three Floyds, for $25! This includes food, music by DJ Nick Ruich, raffles and games. This starts at 2 p.m. and goes until 2 a.m.! All proceeds will be used solely for Argus's training.