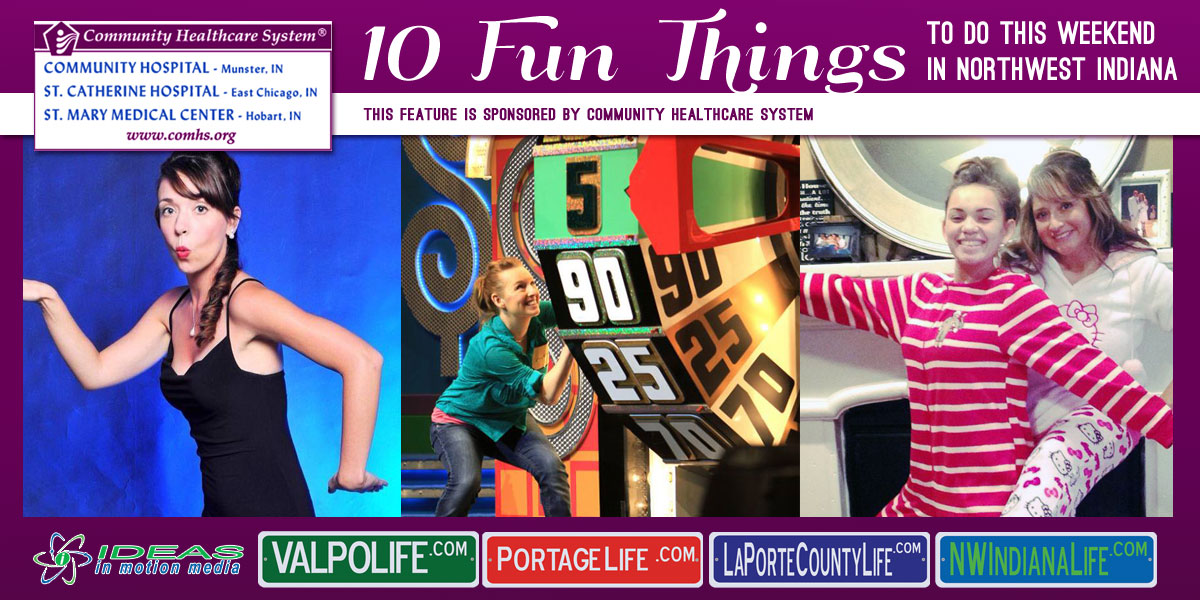 Spring is so close you can almost taste it! This weekend has plenty of fun events to hold you over as the weather warms and the calendar moves into March. As always, if you have an event you'd like to feature, send us an email at share@ideasinmotionmedia.com!

Chicago Street Theatre Press Release: ENCORES! Diamond Jubilee- Celebrating 60 Years of Theatre
On Friday, February 27 the stars of Community Theatre Guild's past and present will come out to play as Chicago Street Theatre celebrates 60 years of theatre with ENCORES! Diamond Jubilee at the Valparaiso University Center for the Arts. This incredible night of entertainment will begin at 7 PM with a cocktail reception and silent auction. The black tie optional gala is the eighteenth time that the theatre company has held this type of event to raise funds for the theatre's ongoing projects, educational programs and capital campaigns.

Towle Theater to Present "Shirley Valentine"
The 12th Season opens with the one-woman comedy Shirley Valentine staring Suzanne Nyhan. Patrons may remember Suzanne from her stirring performance as Elizabeth Hardy in Good Boys and True. Shirley Valentine is a middle-aged, working class Liverpool housewife. Feeling stagnant and in a rut, Shirley finds herself regularly talking to the wall while preparing her husband's chips and egg. When she goes on holiday to Greece, she finds romance and a new awareness of who she is and what her existence can be with just a little effort on her part. A movie based on the play was released in 1989 staring Pauline Collins. Shirley Valentine runs February 27-March 15, 2015.

Stand Up For St. Jude House on February 27
Stand Up For St. Jude House is a special fundraiser that offers an outstanding dinner and great comedy. Join us on Friday, February 27th at Avalon Manner in Merrillville for an evening that promises to chase away the winter blues. Come at 6:00 p.m. for cocktails, followed by dinner and entertainment at 7:00 p.m. Pat McGann is the comedian and there will also be a live and silent auction.

The Price is Right Stage Show Coming to Star Plaza Theatre in February
The Price Is Right Live™ is the hit interactive stage show that gives eligible individuals the chance to "Come On Down" to win. Prizes may include appliances, vacations and possibly a new car! Play classic games from television's longest running and most popular game show from Plinko™, to Cliffhangers™, to The Big Wheel™, and even the fabulous Showcase. Playing to near sold-out audiences for nearly nine years, the Price Is Right Live! has given away more than 10 million dollars in cash and prizes and sold more than 1.2 million tickets.

2015 Free Spring Movies at Goodrich Quality Theaters
Bring in Spring with Free Spring Movies on Saturday, February 28! Every Saturday and Sunday at 9:00 A.M. and 10:00 A.M. see a select movie for free! All ages are welcome and free of admission. 2/28 & 3/1: The Boxtrolls

Father/Daughter Game, Senior Day Announced for February 28, 2015
The Valparaiso women’s basketball team is pleased to announce this Saturday afternoon will serve as both Senior Day and its annual Father/Daughter Game. Each daughter in attendance with her father will receive a t-shirt and team-autographed poster. The cost is $10 for each father/daughter pair and $4 for each additional daughter.

Portage High School Athletic Department to host Annual Cabin Fever on February 28, 2015
The Portage High School Athletic Department will host it’s annual Cabin Fever fundraiser on Saturday, February 28 at Woodland Park from 7:00pm-11:00pm. Tickets are $25 and include 1 entry for the Big Red Raffle with a chance to win a &1,000 cash Grand Prize as well as numerous other prizes. Free appetizers, music and a silent auction are also part of the night. This event serves as a major fundraiser for the PHS Athletic Department and all proceeds go towards major equipment and/or uniform purchases.

Join Us for Hometown Happenings First EVER Pajama RUN!
Don’t want to get out of your warm, comfy jammies in the morning? No need to! Just jump out of bed, lace up your running shoes and you are good to go! This timed 5k starts at Youche Country Club in Crown Point and is a great way to start your racing season while giving breakfast to someone in need! Your 5K Run/Walk Entry Fee Includes: Awards for Top Overall, Top Masters & Top 3 Finishers in each age group Prizes for “Best Pajamas” After the run, join in the BIGGEST pillow fight! You must bring your own pillow to participate. DJ Music & LIVE entertainment! Breakfast provided by the Great Harvest Bread Co. and Cafe Fresco after the Run/Walk. Buying breakfast for those in need! Please choose where you would like to donate a breakfast: Food Bank of Northwest Indiana, Humane Society Calumet Area, St. Jude House & St. Mary’s Food Pantry. We will also be collecting breakfast and other non-perishable items for the local food pantries.