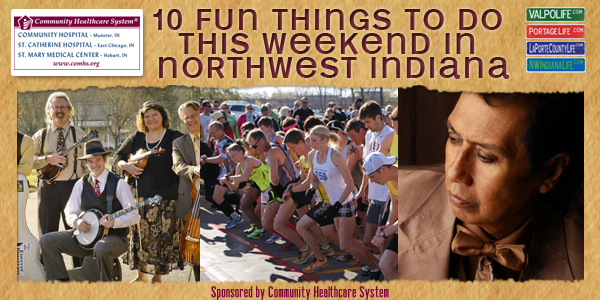 Each weekend we bring you 10 Fun Things to Do in Northwest Indiana so you are never without something to do! This weekend, the region will play hosts to concerts from Imagine Music Concert Series and The World Beloved, theatre productions from The Footlight Players, Chicago Street Theatre and the Towle Theatre, Northwest Indiana's biggest race in the Ringing in Spring, fun events in the Uptown Arts District from the Michigan City Mainstreet Association, a 2-day film festival from Purdue University North Central, and a nature event from the Shirley Heinze Land Trust.

Alejandro Escovedo has been hailed as a poet, as a storyteller, and as one of the most important musicians of the last quarter century. He blends rock, folk, blues, and classically influenced music into boundary-defining style that has won him a devoted following all over the world. His recent album “Real Animal” was co-written by his friend and former Imagine Music Series Artist, Chuck Prophet.

The World Beloved
The World Beloved - A Bluegrass Mass & More is an exciting concert that blends the classical mass, modern choral sophistication, touching poetry and traditional bluegrass instrumentation into an exhilarating musical experience. It is a one night only show on April 4, 2014 at 7:30pm that will take place at The Auditorium at Bethel Church in Crown Point, Indiana.

Valparaiso YMCA's Ringing in Spring 10K/5K
The biggest run so far this year is Saturday! Come join us for the Ringing in Spring 5K & 10K. Online registration is open until Wednesday evening. On Thurs & Fri, register in person at Extra Mile Fitness Company and on race day at the Valparaiso Family YMCA. For more information and to register, visit http://www.ringinginspring.com/

Come and Learn About Urbex Photography
Alton Goin Museum opens for the 2014 season on April 5 & 6 - 1 - 4 pm at Countryside Park 5250 US Hwy 6 Portage. We will have a premier viewing of Cindy Cupcake Photography and her husband Larry Bean photography. Cindy and Larry Bean will be at the opening on Saturday April 5. Refreshments of cupcakes and jelly beans! Check our Facebook page for more details www.facebook.com/pchs88 or call the museum at 219-762-8349.

On April 4, the Opening Night performance will be followed by a party at Strongbow Inn and a Happy After Hour Party will follow the Friday, April 11 performance at Parea. Tickets are $18 for Adults and $15 for Students and Seniors.

Towle Youth Theater Ensemble Presents Romeo and Juliet
William Shakespeare's Romeo & Juliet is easily the most widely performed play in the world! So as the creative team at the Towle Theater in Hammond prepared to do an adaptation, they approached this classic piece of theatre from a perspective close to their own work. Towle Youth Theater Ensemble pulls talented young people from all over the Chicagoland and NW Indiana area. Therefore, this adaptation matches the production process rather than presenting the entire piece. The belief is that the audience is familiar enough with the story to be able to understand and follow an abbreviated, artistically creative version of the show.

PNC, Partners Presents 2014 Jewish Film Festival
Purdue University North Central Odyssey Arts and Cultural Events Series, with the Michigan City Public Library and the Irving Levin Jewish Cultural Fund of Sinai Temple, will present a Jewish Film Festival on Saturday, April 5 from 2 to 5:45 p.m. and Sunday, April 6 from 1:30 to 5:30 p.m. at the Michigan City Public Library, 100 E. 4th St., Michigan City. The film festival is free and open to the public. Refreshments will be enjoyed during a coffee klatch and cake break.